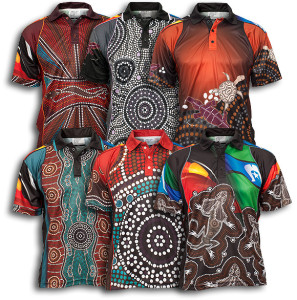 Other designs feature Dot designs which include a number of important colors. For example yellow (representing the sun), brown (the soil), red (desert sand) and white (the clouds and the sky). These are traditional Aboriginal colours.

On modern artwork, dots are generally applied with one of two instruments, (1) bamboo satay sticks and (2) ink bottles. The larger flat end of bamboo satay sticks are more commonly used for single application of dots to paintings, but the sharp pointier end is used to create fine dots. To create superimposed dotting, artists may take a bunch of satay sticks, dip the pointy ends into the paint and then transfer it onto the canvas in quick successions of dotting.

We work together with indigenous organizations in creating their own unique design that fulfills their cultural and artistic requirements. 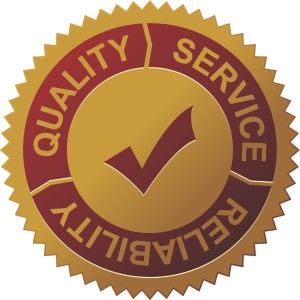 The Stencil range of clothing has been bringing innovative new designs and fabrics into the Australian corporate, promotional, uniform and sportswear market. Stencil is best known for their high-quality, high-concept fabrics such as a yarn-woven Cool-Dry®, liquid-repelling Nano-Gear®, the vibrant and super-comfortable Solar-Lite® and their most recent addition, Bio-Weave®, a silky blend of plant cellulose and Cool-Dry® yarn.

Stencil’s product range spans from distinctively styled polos and t-shirts for both men and women to business shirts, cold-weather clothing (including fleeces and jackets) and custom orders. Though Stencil is constantly working on creating and refining their new fabric technologies for each season, Stencil also appreciate the value of more traditional fabrics, from soft cottons to poly/cotton waffles. By understanding the intrinsic values of different materials, Stencil is able to match the ideal characteristics for a given item of clothing to the most appropriate fabric or blend.

Stencil carries a full stock service on all of their product lines with the promise of fast & professional service. Stencil trusts that their range will help you and your label stand out from the crowd.

One of the earliest examples of T-shirts with a logo or decoration can be found in the 1939 film The Wizard of Oz. Three men attending to the Scarecrow at the Wash & Brushup Company in Emerald City are seen wearing green T-shirts with the word “Oz” printed on the fronts.

In the early 1950s several companies based in Miami, Florida, started to decorate T-shirts with different resort names and various characters. The first company was Tropix Togs, under founder Sam Kantor, in Miami. They were the original licensee for Walt Disney characters in 1976 including Mickey Mouse and Davy Crockett. Later, other companies expanded into the T-shirt printing business, including Sherry Manufacturing Company, also based in Miami. Sherry, started in 1948 by its owner and founder Quinton Sandler as a screen print scarf business, evolved into one of the largest screen printed resort and licensed apparel companies in the United States.

In the 1960s, the ringer T-shirt appeared and became a staple fashion for youth and rock-n-rollers. The decade also saw the emergence of tie-dyeing and screen-printing on the basic T-shirt and the T-shirt became a medium for wearable art, commercial advertising, souvenir messages and protest art messages. Psychedelic art poster designer Warren Dayton pioneered several political, protest, and pop-culture art printed large and in color on T-shirts featuring images of Cesar Chavez, political cartoons, and other cultural icons in an article in the Los Angeles Times magazine in late 1969 (ironically, the clothing company quickly cancelled the experimental line, fearing there would not be a market). In the late 1960s Richard Ellman, Robert Tree, Bill Kelly, and Stanley Mouse set up the Monster Company in Mill Valley, California, to produce fine art designs expressly for T-shirts. Monster T-shirts often feature emblems and motifs associated with the Grateful Dead and marijuana culture. Additionally, one of the most popular symbols to emerge from the political turmoil of the 1960s were T-shirts bearing the face of Marxist revolutionary Che Guevara.

Today, many notable and memorable T-shirts produced in the 1970s have become ensconced in pop culture. Examples include the bright yellow happy face T-shirts, The Rolling Stones tops with their “tongue and lips” logo, and Milton Glaser’s iconic “I ♥ N Y” design. In the mid-1980s, the white T-shirt became fashionable after the actor Don Johnson wore it with an Armani suit in Miami Vice.