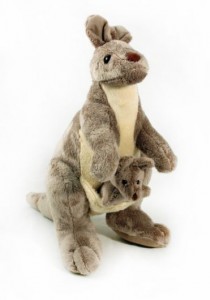 Kangaroo and Joey are cute plush toys made from soft material. Supplied unbranded. Custom made options are available with direct branding.

The kangaroo is a marsupial from the family Macropodidae (macropods, meaning ‘large foot’). In common use the term is used to describe the largest species from this family, especially those of the genus Macropus, red kangaroo, antilopine kangaroo, eastern grey kangaroo and western grey kangaroo. Kangaroos are endemic to Australia.

The terms “kangaroo”, “wallaroo”, and “wallaby” all refer to members of the same taxonomic family, Macropodidae, and the genus Macropus includes some wallaroos and wallabies. The largest species in the family are called “kangaroos”, the smallest are generally called “wallabies”, and the rest are termed “wallaroos”.

Kangaroos have large, powerful hind legs, large feet adapted for leaping, a long muscular tail for balance, and a small head. Like most marsupials, female kangaroos have a pouch called a marsupium in which joeys complete postnatal development.

The large kangaroos have adapted much better than the smaller macropods to land clearing for pastoral agriculture and habitat changes brought to the Australian landscape by humans. Many of the smaller species are rare and endangered, while kangaroos are relatively plentiful.

The kangaroo is an unofficial symbol of Australia and appears as an emblem on the Australian coat of arms and on some of its currency and is used by some of Australia’s well known organisations, including Qantas and the Royal Australian Air Force. The kangaroo is important to both Australian culture and the national image, and consequently there are numerous popular culture references.

Wild kangaroos are shot for meat, leather hides, and to protect grazing land.[8] Although controversial, harvesting kangaroo meat has some environmental advantages to limit over-grazing and the meat has perceived health benefits for human consumption compared with traditional meats due to the low level of fat on kangaroos.

We just received the delivery of our corporate promotional items….they are perfect! We really like the look and feel of them. Thank you so much for your help and for making them happen so quickly. Thanks again. 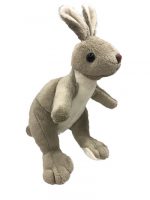