Dominoes is a classic game. Players take turns placing a domino on the table that matches the number of dots on the end of a previously placed domino. The dominoes and instructions are presented in a wooden box with a sliding lid. Branding is on the lid which laser engraves to a natural etch.

Branding Options |  Pad Print: 50mm x 25mm. Laser Engraving: 90mm x 25mm.Dominoes is a family of tile-based games played with rectangular “domino” tiles. Each domino is a rectangular tile with a line dividing its face into two square ends. Each end is marked with a number of spots (also called pips, nips, or dobs) or is blank. The backs of the dominoes in a set are indistinguishable, either blank or having some common design. The domino gaming pieces make up a domino set, sometimes called a deck or pack.

The earliest mention of dominoes is from Song dynasty China found in the text Former Events in Wulin by Zhou Mi (1232–1298). Modern dominoes first appeared in Italy during the 18th century, but how Chinese dominoes developed into the modern game is unknown. Italian missionaries in China may have brought the game to Europe. 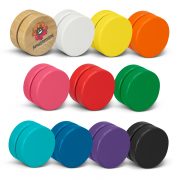 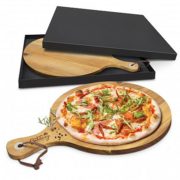