Australian Flag Shirts are polyester t-shirts with a full color printing. The Australian flag is printed on the front and back. These garments are perfect for team wear and supporter clothing. We can include your logos anywhere on the shirt in conjuction with the existing design. Fabric is top quality moisture wicking polyester fabric. Available in 6 sizes. Minimum order for this product is 50 units. Custom made to order.

The flag’s original design (with a six-pointed Commonwealth Star) was chosen in 1901 from entries in a competition held following Federation, and was first flown in Melbourne on 3 September 1901; this date has been proclaimed as Australian National Flag Day. A slightly different design was approved by King Edward VII in 1902. The seven pointed commonwealth star version was introduced by a proclamation dated 23 February 1908.The dimensions were formally gazetted in 1934, and in 1954 the flag became recognised by, and legally defined in, the Flags Act 1953, as the “Australian National Flag”.

Just want to thank you so much for your great service in delivering our order to meet our deadline – you saved the day!! We love our keyrings and our hats – and wanted to thank you and your team. Will be in touch when next we need more promo stuff. 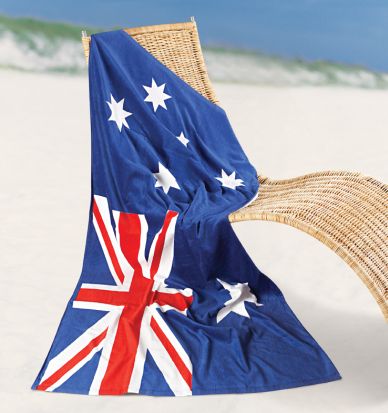